Smarter, Safer Care
Wherever Patients Are

TOPIC: How Do You Classify Medication Events? 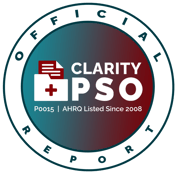 Each report in our Patient Safety Learning Series focuses on a given topic and explores findings and insights based on client-reported safety event data.

In this edition of Clarity PSO’s Patient Safety Learning Series, once again we turn our attention to medications. Through our continued deep-dive analyses of safety event data, we find that despite the growing use of Common Formats, there are still widespread variations in how we interpret and categorize certain elements of a medication safety event. Part of the challenge is that it is difficult to take the time to build consensus regarding what each part of the report is attempting to address. Your event reporting system should be your workflow, from initial submission, to follow through, to final actions and change implementation.

In the PSO world, we receive data from all types of providers and we know first-hand the challenge of large-data aggregation. In our analyses, we clearly see that even within a single organization there are often discrepancies in how certain elements of an event (in this case medication events) are classified. This report is intended to provide insights into how we may better understand and more clearly document medication safety events.

1) Error Origination is an area of medication event reporting that is outlined in various error reporting taxonomies, including the AHRQ Common Formats. The general question and definition are intended to describe where the error originated, just as the name would suggest. In the AHRQ Common Format question and answer options, it is identified in the circumstances of the event, and is worded as such:

Question: “Stage of process where the event originated, regardless of the stage at which it was discovered:"

Two important elements to the classifying and documenting of medication events include:
- The origination point of the event/error itself
- The circumstances and/or the incorrect actions of the event itself

2) Incorrect Action is another common element of medication safety event reporting that shows up in the AHRQ Common Format templates. The category is intended to identify the specifics of the error and to allow for drilling down into the factors associated with the error. In the “Medication” Common Format, Incorrect Actions are identified in the “Processes of Care” portion of the event report and are worded as such:

Even more complex than the origination stage element, the incorrect actions can be tricky to document, and often times we see multiple options associated with one error.

For example, assuming the same scenario as above, if there was an error involving a Dosing-related issue during Administration, one might categorize the incorrect action as clearly being dose related. But it is also conceivable that the event included a different concentration which led to the dosing issue, and so another nurse/provider may include strength or concentration as part of the incorrect action. There may also be a component that involved the rate, if IV route was used, or timing, if the medication was given too early. As noted above, it is critical to understand the circumstances of the event.

This is why it is important to try to gain consensus among all those potentially involved as to how events need to be classified when considering the origination point and incorrect action of the event being submitted. To assist in this consensus building, one might ask the following questions persistently when documenting the nature of an event:

(For example, was it the dose, or the timing, or the concentration? There can be many contributors, but what is the circumstance of the event?)

Let’s take a look at a small sample of data when filtered for Origination Stage and Incorrect Actions: 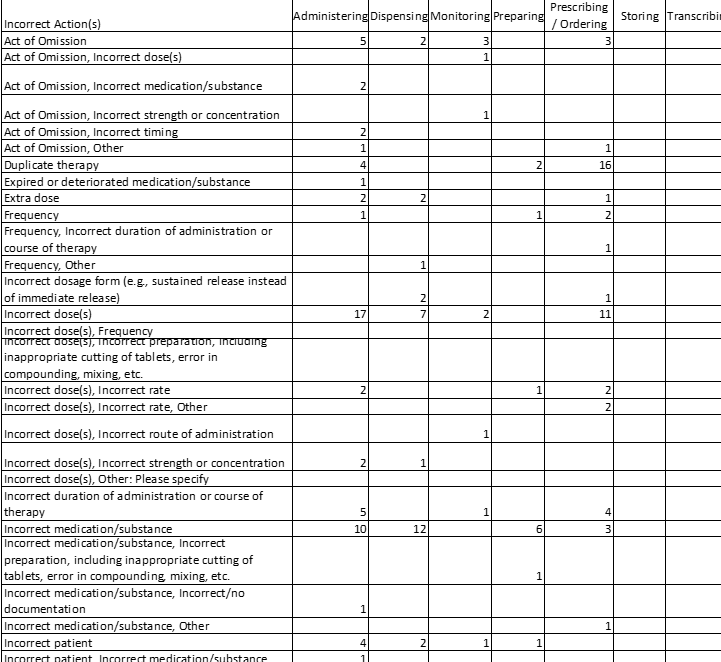 Without getting into the specifics of these numbers, we can summarize a few challenges in the analysis. First, there are multiple events where more than one incorrect action was documented. Were there really multiple incorrect actions taken during the event? Perhaps there were. But while this may be true, the analytical interpretations are most valuable when we investigate the circumstances of the event, such as when the investigation first occurs inside the organization immediately following the event. But in furthering the analysis and aggregating data down the road, it is important to ask the question again: Was the event classified accurately?

Another challenge is that the same combination of incorrect actions occurs at different originations. While this may also be true, when we review medication events in the aggregate to expose national trends, it is critical to again go back to those core questions and identify the true source(s) of the error.

There are differences in the way healthcare providers interpret the ‘origination point’ of an error. So it is important to be clear in defining those points and ensuring that the meanings of those definitions are understood. Collecting errors in a common way allows for more relevant comparisons across like-providers in order to identify best practices and opportunities.

After data are reviewed, cleaned, and scrubbed, we can begin to make sense of what’s been reported. 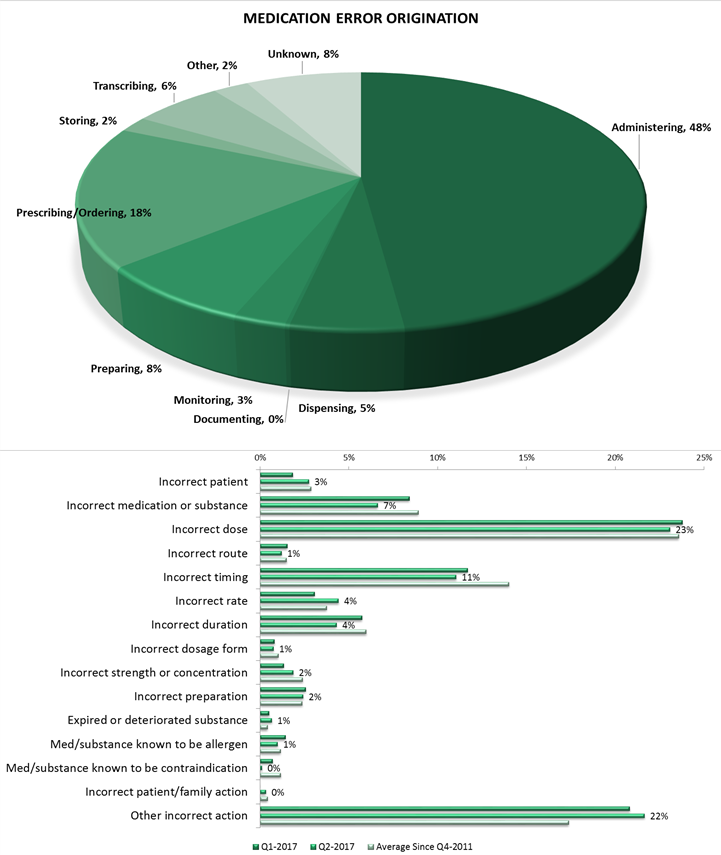 When we review medication events that are classified correctly, we can identify the frequency of error origination points as well as the types of incorrect actions. The graphs above show that in the aggregate, the organization would be best served initially to focus on development or refinement of fail-safes at the administration point, and perhaps also at the dosing point. In this case, with our efforts at analysis, the story becomes somewhat clearer, but it also illustrates just how subjective the attempt to classify reported data can be.